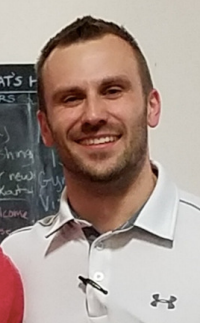 A man who is young, fit, and full of life.

He is married to an amazing woman who supports him fully and loves him unconditionally, and a new father to a son who endlessly radiates infectious joy and energy.

He has a nice house, a supportive and helpful extended family, and has worked hard to change his profession and establish a successful career path.

He is perpetually positive and always looking to make those around him smile and laugh.

He is a man who seems to have it all together.

Except behind closed doors, he is ripping apart at the seams.

The man in the story is me.

Hi, my name is Dave Vargo and this is my life.

The former story is not to suggest that my every day existence is an outright lie, per se; rather it is a mask that I use to protect myself and others from the grim truth:

For most of my adult life, I have been fighting a war with depression.

Those who are unfortunate enough to share this diagnosis know the weight that this word truly holds.

It’s critical to understand that clinical depression is more than just simply “feeling down”, or having a terrible day. It’s more than what we feel after a breakup or losing a job.

This isn’t to downplay the inherent shittiness of these events, it’s simply to say that depression hits quite differently. In fact, for me at least, depression seems to rear its ugly head when it makes absolutely no sense. When everything seems to be going just fine.

Also, notice that I’ve used the word war, not battle. The general literary analogy suggests that a war is made up of many battles that can be won or lost (i.e. “you’ve won the battle but lost the war”). I bring this up because there have been many battles in years past that I have most certainly lost.

The reality is: Depression possesses the immense power to steal days from your life.

There have been mornings where I could barely scrape together enough motivation to just put my feet on the ground.

When I did, I was nothing more than a zombie. A robot.

Every step I took was a chore, every word I spoke was forced, and every breath I took was just one less that I had to take before I came home to collapse back onto the bed.

Everything in my life would come to a screeching halt.

I couldn’t eat. I couldn’t exercise. And, most detestable, I put an unfair amount of strain on my relationship with my wife. I can’t begin to describe the guilt and disgust that results from feeling like you’re failing those who love you and depend on you.

What’s more, prior to becoming a full-time trainer in 2017, I was stuck for years at an absolutely soul-crushing dead-end job, which made a bad situation worse. Every morning begged the question if today would be the day that depression’s looming hands would descend and take firm grasp.

After years of cyclically sinking further down, I found myself consuming a steady diet of Xanax and dip during the workday. Anything I could get my hands on to numb my miserable existence and, more often than not, the evening was capped off by more than a few healthy servings of bourbon.

I still remember the evening of my interview with Fitness Together.

Darkness had just begun to creep in as I left the Jewish Community Center long after hours; the cold wind beating against my face as I made my way back to my car. My mind was racing and my back cramping, the lingering effects of an anxiety attack that I had suffered during the service call I’d just wrapped up.

It had become common for me to suffer from regular panic attacks at work. And that’s what happened on interview day. So, in frustration, I emailed the owner of the studio to say I wouldn’t make our interview while I struggled to compose myself amidst a scattering of copier parts across the floor.

After I finished up the service call, I trudged out to my car, carelessly dumped what I had in my arms into my trunk and slammed it shut. Then, I sat in silence for a minute and took a few deep breaths to allow the storm in my head to pass. It was at that point that I shook my head and had a moment of realization.

I submitted to the fact that this needed to happen. It was a sign - especially after the particularly anxiety-ridden month that I had just endured - that this was seemingly the universe’s last cruel shit on me before I rose above to the next level in my life and career.

I needed to wipe the proverbial blood from my face and get my ass up to that studio. This was now my time, and I refused to let this fucking job cut away any more of my future and steal any more of my soul.

I sped up to the studio and fearlessly paraded through the door, my disdain for the situation that I had to overcome still simmering in the back of my mind.

Chris – the general manager at the time –was surprised to see me, mentioning that he thought I canceled, to which I gave him a short overconfident line of “Well, I made it anyway.” I buried my nervousness and took him through the mandatory “interview workout”, pouring out as much of my knowledge and passion as possible, and we followed it with a sit-down interview which would prove to be the first of a few successful steps to begin the next chapter of my life.

Like many who share this curse, my depression comes in waves. Highs and lows. Wins and losses.

It is a war made of many battles.

And, though I have lost many battles, I am still winning the war.

Because I am still here.

If I open my eyes in the morning and I see light and can draw breath, I have a goddamn chance.

This is what I say to myself in times of darkness, and it will likely be echoed for the rest of my life.

One of my biggest fitness and business influences, John Romaniello, once uttered this very powerful assertion:

”So much of anxiety and depression comes from feeling out of control, and training gives you a very secure measure of control.”

I have found this to be true as well.

Out of all of the things we encounter in life, the ability we have to mold our habits and impose our will onto our own body is the ultimate exercise of control. The power we have – but sometimes do not use – to affect every area of our life is immense.

Fitness is more than just losing weight and gaining muscle.

It’s more than fitting into an old pair of pants and looking good naked, or than lifting more weight than we did before.

Sure, these elements are important, but I’d argue vehemently that in most cases, the true benefit of fitness is buried much deeper. Deeper than most of the surface-level answers we give to the question of “What are your goals?”

Peeling back the most superficial layers of a person’s psyche, concealed below the surface you might find the confidence that’s needed to allow a man to finally take the next step to excel in his career.

Or the mental strength to recover from a divorce or failed relationship.

Or simply the will to do something; anything, to find light when darkness falls and getting out of bed is a seemingly unachievable action.

Fitness is a vehicle that allows us to create a focal point for taking back control over our body and mind.

In Greek mythology, the Phoenix is a legendary mystical bird that cyclically bursts into flames and rises again from the ashes of its predecessor. This powerful symbol of renewal and regeneration can be applied to any number of hardships we endure over the course of life.

Whatever form life’s adversity may manifest  – anxiety, depression, loss of a loved one, divorce, or the shame of failure – you have a very clear choice to either wallow in your pain and sink further down, or burn your shit down and rise from your fucking ashes.

Sure, the scars of yesterday will always rise with you. I personally relish this, however, and wouldn’t have it any other way.

Rise from your ashes.

Be a fucking Phoenix.

Leverage the dormant fire you have burning within by taking action on your fitness goals today.

I’m here for you.